It’s been fun seeing the various activities people are doing as part of the #50daysofwinterrunning challenge. I’ve even been converted to Instagram as part of it!

Day Six: Friday is always my rest day. For some reason, I’ve always struggled with exercising on a Friday – I’m not sure why! After a busy week at work I spent a bit of time on mapometer.com planning a route for the next morning, then did some foam rolling.

Day Seven: I met one of my TempoFit buddies for a long run. We ran 14km around the city and through the Domain. I felt like it was much more of a struggle than the weekend before, although I’m not sure why. No Prime Minister sightings this time, but lots of pretty leaves.

Day Eight: After the run on Saturday I was keen to take it fairly easy on Sunday. My Mizuno’s are starting to get a bit worn down now, and unfortunately they discontinued the Wave Nexus. I was on my third pair, but now they are nowhere to be found. I wanted to get a comfy pair to use alongside my Asics, so I popped into my local Shoe Science. The team there was great as usual, and I ended up leaving with the Adidas Supernova Glide – back to pink shoes! I finished off the weekend with some more foam rolling (ugh!) and a Nike Training Club workout.

Day Nine: In typical winter running form, it was raining. I ended doing a Nike Training Club (NTC) workout at home, while the triathlete made dinner. The app is great with so many different workouts available to choose from. I may have ended up yelling at the poor voiceover but that was simply due to my lack of flexibility 🙂

Day Ten: And then the storm hit. It wasn’t possible to run after work due to the crazy weather, so I decided that my 2km walk commute (work to train, train station to home) would have to do, and at least I was wearing sneakers! I also managed another NTC workout, although this time it was a 15-minute yoga session. It’s fair to say my muscles are pretty sore!

Day Eleven: Took my new shoes out for the first time on a short 30 minute run around the central city. I was worried I would be frozen but it was still really warm. Such weird weather and makes me worried for this weekend and the Run Auckland 10km I am meant to be doing.

Want to join the #50daysofwinterrunning challenge? Check out Hayden’s blog here and get inspired to mix things up a bit this winter!

This was me at 7pm last night.

I’m not really a run in mud kinda girl (or sand, or stones, or grass). I quite like pounding the concrete. When it was pouring I knew there was a chance we’d be splashing over the fields at training, and we did. In a tempo workout that kicked my butt, I nearly lost a shoe in the mud, but had an awesome time with the ladies in my pace group. We started together and finished together, and I’m pretty sure I talked too much (not enough oxygen made it hard to get up the hill)!

A good workout and I didn’t fall over in the mud, which was my biggest fear. I’m a bit sore today though so glad it is a cross-training day with indoor netball tonight.

BUT how should you clean running shoes?? I rinsed them last night – they were so full of rain/mud I might as well have soaked them in a bucket! I’ve now got them drying over the tub and they’ll be in the hot water cupboard tonight… I think I need a second pair of these!

I have to count running in the rain yesterday as one of my favourite runs ever – up there with running in the snow in Copenhagen, and through the Botanic Gardens in Sydney.

It had been raining on and off but I decided to take my chance and head out for a run. I headed uphill to start off with only a few spots of rain. This quickly changed to some steady rain, but it was still warm enough to be comfortable.

I was running well, my knee wasn’t hurting… and then the torrential downpourt begun! I was very happy I’d chosen my adiZero featherlite shoes (over my usual Nike LunarGlides) as they didn’t absorb too much water, and that I was wearing a cap so could still see. I was also glad I’d decided to leave my ipod at home for this run, as I don’t think it would have survived.

I managed to run for about twenty minutes over quite a hilly area – the longest I’ve managed since my IT band issue started in February. Running downhill on the last stretch was interesting, there was so much surface water that the water in the gutters was level with the footpath, and there were rivers of water rushing down the driveways.

I’d always been a bit nervous about running in the wet, and while I probably wouldn’t want to do this in the winter and risk getting sick, I had so much fun! I literally could not wipe the smile off my face, even when my flatmate laughed at me when she opened the front door to see me standing there like a drowned rat. Turns out that my ‘rain jacket’ really can’t cope with any rain, instead it just added a bit of extra weight for me so schlep around the streets.

There is more torrential downpours expected this week, knowing Auckland I’ll probably head out in the sunshine and then get caught in the rain. 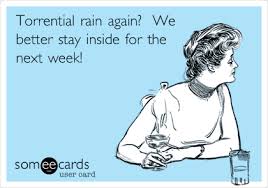 Now the challenge is on to find the perfect running jacket! It needs to be light, waterproof, have a hood with a drawstring, a fitted/adjustable hem, adjustable sleeve ends and be long enough to stop riding up above my hips, ideally be reflective and not cost the earth… surely that should be easy to find?

The Powerade Challenge is back again!

It’s a 9K route along the Auckland waterfront, which you time yourself on using a nifty wristband and two vending machines. I’ll be including this as part of my training. It’s a relatively flat course, but it can get pretty windy along there.

The challenge course just happens to be part of my route to work each day. Regardless of whether I drive, catch the bus or catch the train to work, I get to enjoy the everchanging waterfront. In just one week we might have crazy storms with the waves crashing onto the footpath, to a beautiful sunrise reflecting across the calm water, to sunshine and wind with lots of sailors out and about.

It will the great to challenge myself against a bunch of work colleagues in our ‘team’, although really with my current IT band issue I’ll be glad to just make it the whole way a few times. The current plan is to do a slow run this weekend – and a run/walk attempt at the powerade challenge course next weekend! I’ll aim to complete the course four times over the two month period it runs for.

If you spot a slow runner in bright pink shoes, give me a wave – I might be battling!